For those curious, I'm still trading and am doing well. I've withdrawn from most social media. Social media has its pros and cons, but I feel the cons outweigh the pros these days.

Anyway, I wish everyone all the best.
Posted by Kevin LaCoste at 11:04:00 AM No comments:

Had a good start to 2018. Bagged three winners, while enduring one loss.

Saw a small retracement during the uptrend, and went long on the break of the bearish candle. 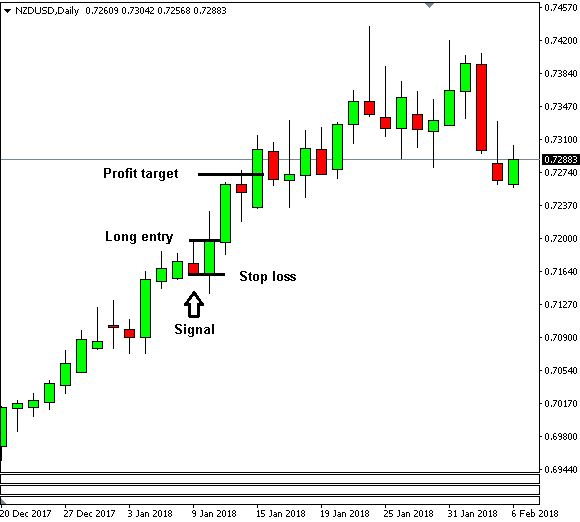 Went long on the NZDUSD again, but was quickly chopped out. 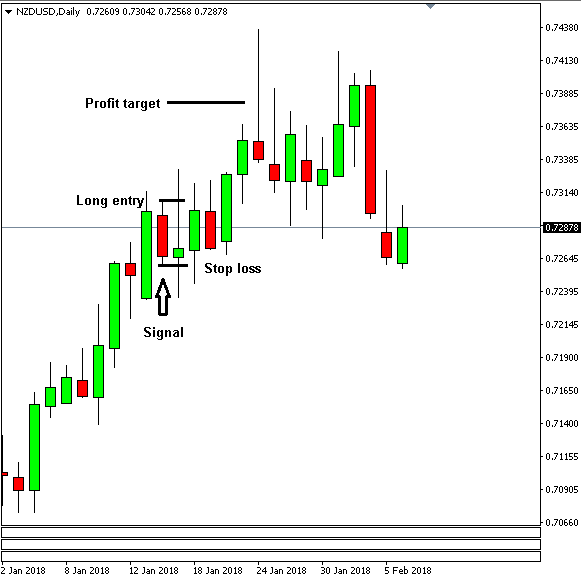 This trade moved in my favour very quickly. 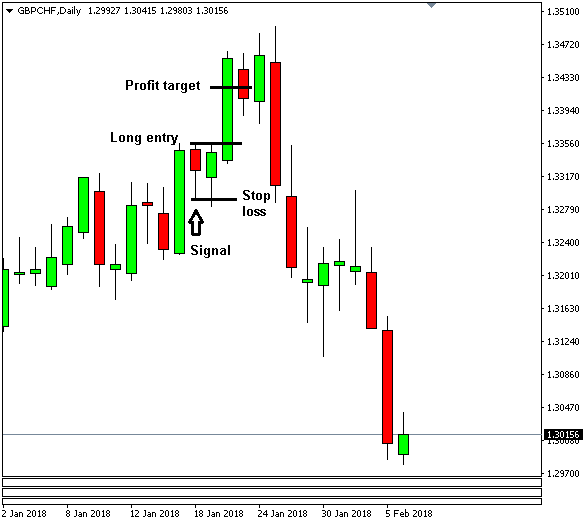 Went short on the EURGBP after a small retracement and bagged a win. 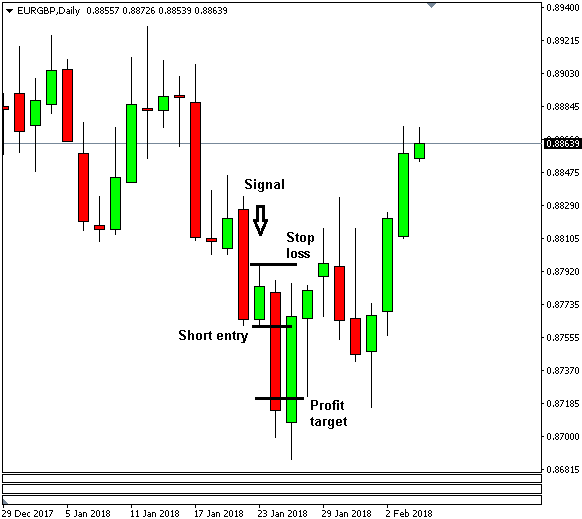 With the holidays over, I began to spend more time on backtesting and research again. Fingers crossed for the rest of 2018!
Posted by Kevin LaCoste at 2:38:00 PM No comments:

I really should get back into blogging...

So I made a loss of -6.6% at the end of 2017. It's not a good thing. I initially started the year with blistering position sizes between 2% and 3%. I felt very confident after being profitable for two running years.

By mid-year, my drawdown approached 14%. I'd begun reducing my position drastically to around 0.5%-1%.

One particular trade blew a 5% hole in my trading account (mentioned here).

I noticed some psychological effects in my trading as a result of an extended drawdown:

1) I traded less. In a way, this is a good thing. If you have a negative edge, you WANT to trade less, and ideally, not at all. But because I traded less, my self-identity as a trader began to fade. In my opinion, during extended drawdown, try to trade, but trade extremely small. A token position worth a few dollars may be preferable than nothing at all. At least you'll stay connected with the market, and get cheap feedback on your trading.

2) I spent more time on other hobbies. It's good to diversify your interests. But because I was doing other things, I spent much less time on research and backtesting, which impaired my self-improvement as a trader.

3) I began losing vision of my future. This is probably the big one. When your dream begins slipping away, it's very easy to grow disillusioned. You lose alot of motivation. Honestly, I don't have a solution to this, except to just keep grinding, and perhaps to keep your vision vague? I know some people recommend setting specific targets to hit, so you can find the most efficient strategy to hit those targets (e.g. to lose X kilograms per week, I need to reduce my daily energy intake by Y calories). But you can't do that with something as unpredictable as trading. Just take one trade at a time and execute.

So what to do?

I made a list of what I think are positive and negative sources of edge here. This wasn't a random exercise. I wanted to see what I could implement (or get rid off) to get my trading back on track.

Going into 2018, I'm sticking to a single strategy for now (low volatility breakout). I don't have full confidence in some of the other systems I developed. My #1 goal is to finish 2018 with a positive number. The size of that number doesn't matter, as long as it's positive.
Posted by Kevin LaCoste at 6:49:00 PM No comments:

Sources of positive and negative edges

Just a rough summary that I scribbled in my notebook.

SOURCES OF POSITIVE EDGE (apply as much as possible)

SOURCES OF NEGATIVE EDGE (avoid as much as possible)

Just a quick update on my trades for this year.

I'm currently at a -2.95% loss for the year, just below breakeven. I'm not really happy, but it could be alot worse.

This whole year has basically been a grind around the breakeven mark, falling behind, pulling ahead, and then falling behind again.

I backtested all my systems up to the present and dropped those that stopped performing,. I'll wait until when (or if) they return to profitablity. Waiting is free.

It's very important to have drawdown rules in place. Reducing your risk during drawdown will allow you to survive until your trading turns around. It's boring, but it has to be done.

To be honest, I violated my own drawdown rules a few times, and paid the price. If I had been true to my rules, I'd probably be slightly profitable by now. During August, I risked 3% on a single trade when I should've stuck to 1%. I held the trade over the weekend, and the market gapped against me on Monday morning. I lost 5% when price opened way beyond my stop loss, more than the 3% I anticipated. I might talk about this trade in a future entry as it provided a few key lessons - stick to your rules, and maybe reduce your risk when leaving a trade open over the weekend.

It's also important to find interests outside of trading. During times of drawdown / breakeven, you'll want to find other sources of success or motivation in your life. It could be fitness, knowledge, or maybe a new skill. Don't base your identity solely on being a trader.

Survive. Play great defence. If you truly are better, you will win in the end. And if you aren't better? A tight defence will keep you in the game indefinitely.
Posted by Kevin LaCoste at 11:00:00 PM No comments:

Just a short message. I've set comments to moderated / disabled since this blog has been spammed to hell. Still alive and trading. :)
Posted by Kevin LaCoste at 10:12:00 PM No comments:

Hey everyone, here's my performance review for 2016!

This year I made a return of 15.3%. Most of that was made during the first seven months of 2016, which was then followed by slow, gradual drawdown which has thankfully stabilised over the last few months. 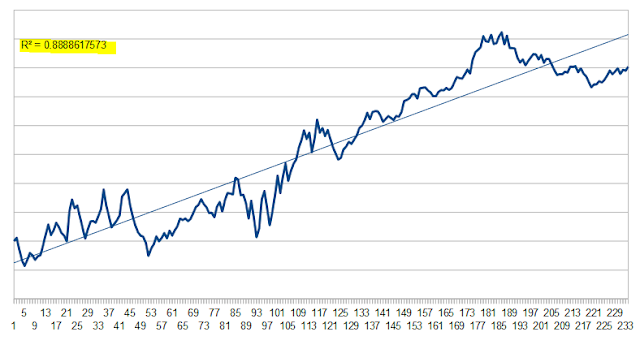 Take note of the linear regression line, and how R^2 is 0.89. This is from real world results. That is beautiful. If you're wondering why the first half of the equity curve looks more volatile, it's because I traded with higher risk in 2015 (average 1.96% per trade), while in 2016, my risk was nearly half, at an average of 1.18% per trade.

I'm officially a trader
It's time to officially call myself a trader. After half a decade of learning and two years of consistent live trading, I've assembled a very good equity curve that I'm very proud of. That's real, hard cash that I've extracted from the market by myself. It's all real.

Myfxbook
At the start of the year, I opened a public Myfxbook account that I've maintained throughout 2016. It's been an interesting experience, but after a year, I no longer see much upside in continuing the account. I've noticed myself becoming anxious with people watching my trading account. What do I get out of it? I've considered trading other people's money and using Myfxbook to attract investors, but in the end, I feel better trading for myself only. It'd be nice (and lucrative) to trade other people's money, but there's alot of legal and psychological obstacles to overcome that can only erode my edge. And for me, trading is about freedom. So I plan to turn the account to private early next year.

Plugging leaks
At this point, it's no longer about finding the "perfect" trading system. It's about finding and plugging all the leaks that erode my edge - physical, mental, financial, psychological etc. I'm taking inventory of everything. If it harms me, I'm letting it go.

Reduce work hours?
If I can maintain my trading results, I can look at reducing my working hours in my RL job. That's the dream of all traders, right? :) At the least, I've got options. I have one foot out of the rat race already. It's a very good place to be. :)

And that's that! A profitable year is a good year.
Posted by Kevin LaCoste at 1:16:00 AM No comments:

Posts or pages on forexiation.blogspot.com and the Forexiation blog do not constitute financial advice and do not take into account the individual circumstances and needs of traders or investors.

The Forexiation blog / Kevin LaCoste is not a licensed financial advisor. This site should not be used to make trading, financial or investment decisions. Please do your own research and seek advice from a licensed advisor.

You must be aware that forex trading is very risky and can result in substantial financial losses.

Forexiation / Kevin LaCoste is not liable for any trading, investment or financial losses.